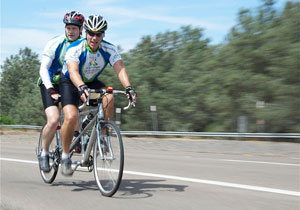 Art Jones has been racing BMX bikes since he was 12 years old, and even after losing his eyesight at 18, he continued to partake in one of his favorite hobbies. Art is what is known as a stoker, someone without eyesight who rides a two-seater bicycle while another person, known as a captain or pilot, steers it. In 2012, Art became the first blind person to compete in the California Triple Crown, a long-distance cycling event.

As an inspirational figure in the California cycling community, Art does many charity events and belongs to local cycling clubs in the San Diego area. His story can show through inspiration that it is possible to enjoy a good bicycle ride throughout the beautiful state of California even if you lack eyesight.

What Is a Stoker?

Stokers are individuals with blindness who use two-seater bicycles, one seat for the individual with blindness to pedal the bike and one seat for a person to help them navigate. Together as a team, the “pilot” can help the other person avoid obstacles that would otherwise make cycling impossible for a person without eyesight. San Diego is known for being home to the Blind Stokers Club, one of the largest of its kind in the country. Founded in 2007, the group has more than 100 active members and 30 cycling teams.

A person does not have to have eyesight to find cycling to be a great activity, and as Art put it, “when you get on a bike you feel free”. The San Diego cycling community is strong, and the city continues to develop bike paths to allow more people to enjoy the activity.

Joshua Bonnici is a long-time rider and supporter of the Blind Stokers Club, a pilot of his team, and he enjoys spreading the word that cycling is for everyone.

Did You Know? American drivers could save a combined total of $7.3 billion a year with one four mile round trip to work on a bicycle each week.