The Amgen Tour Sets Out in Sacramento

Spirits were high and the excitement was contagious as the Amgen Tour of California officially began in Sacramento. The 123-mile opening ride took riders on a loop along the Sacramento River, then up to Auburn and back downtown. 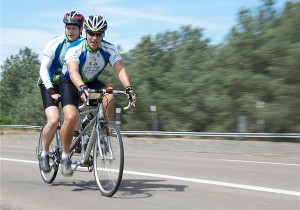 The eight-day event is considered the height of cycling fever in America, and attracts some big names, like Peter Sagan, Bradley Wiggins and Mark Cavendish. The ride covers 700 miles of California hillside and has previously been held in San Francisco and Los Angeles.

Cyclists took off from the starting line at 10:50 a.m., moments after the national anthem was sung, while onlookers cheered and snapped pictures with their phones.

The ride started off ceremonially, with riders traveling at moderate speeds until they hit the open road. There, the fierce competition began to show as cyclists picked up the pace and began fighting for position.

Riders and onlookers alike say that the defining element of the race was crosswinds, which split the group and changed the dynamics of the race.

The ride has multiple stages and winners are declared at every stage. Mark Cavendish was declared the winner of Stage 1, edging out John Degenkolb by a tire’s width. Olympic champion Bradley Wiggins won Stage 2 with a time of 23:18 on the 12.4-mile course, setting him in first place overall.

At the time this article was published the race was still in progress, so no clear winner has been determined.

I Need an Experienced Cycling Lawyer in San Diego

Cycling is a big part of San Diego culture. To speak with a lawyer who rides and knows the needs of cyclists, call Joshua Bonnici. He has experience defending cyclists, and can help you realize your rights in any cycling case.

[Did You Know: Bicycle commuting burns an average of 540 calories per hour.]